Raquel Vázquez (Lugo, Spain, 1990) tells us how surprised she was when she learned she’d won the LOEWE Young Poet’s Award. “A few hours prior to receiving the phone call, I thought fleetingly about the Prize; about how much I wanted to win, yet how unlikely that possibility seemed,” she recalls. She had sent her submission encouraged by the make-up of the jury and the prestige held by both Editorial Visor and the LOEWE Foundation, but she confesses that she could have never imagined “the Prize’s enormous impact and the subsequent warm reception the book received.” She is “beyond grateful.” 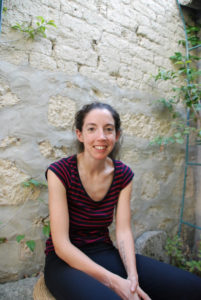 Aunque los mapas —the award-winning book, which has also won the Radio Nacional de España Ojo Crítico Prize— hides much of Vazquez herself. The poet explains that writers “need to feed on memories, dreams, experiences, conversations, readings…. The words we write don’t necessarily have to tell a true story, not by a long shot, but we must always begin with our own experiences.” In order to convey truth and honesty, she adds, “the starting point is crucial because it’s what the reader will perceive; meanwhile, the amount of truth versus fiction is actually completely anecdotal.” She admits that in Aunque los mapas “there is a direct link between the personal journey that I have been on in recent years —one of reflection, disagreements, disappointments, and search— and the one the book recounts.”

Vazquez is still moved by the reaction of certain Jury members to her book: “For Gioconda Belli to highlight the way I close my poems or that my poetry is accessible yet refined is amazing. These are aspects I tend to focus on so it’s extremely gratifying when such an accomplished poet notices them,” she tells us.

La policía celeste, written by someone she “appreciates and admires” as much as Ben Clark, is the book she would choose from among previous winners as the one closest to her writing style. She also mentioned He heredado un nogal sobre la tumba de los reyes by Basilio Sánchez and Juan Antonio González Iglesias, Margo Glantz and Belli herself as the poets “who have left the biggest impression on me.”

Raquel Vázquez is already working on a new collection of poems. “There is some common ground with Aunque los mapas. Spaces, for example, still play an important role. But, as always, I try to go a step further: in the research and in the possibilities of language, both in form and in substance”. Vázquez, who likes to alternate between poetry and narrative, is working on a book of short stories and planning to get back to a novel she started writing some time ago: “I think the time has come to dive in and finish it.”

Sharing the limelight of the Prize’s 32nd edition with another woman —Aurora Luque from Almería— is nothing out of the ordinary. For Vázquez “what is significant is that it took thirty-two editions for both winners to be women. Or that, to date, only two women have won the main prize: Cristina Peri Rossi and Aurora Luque.” And, as if thinking out loud, she adds: “The current poetic scene in Spanish is extremely diverse and rich, with both men and women standing out equally. Here’s hoping that the Prize will continue reflecting the quality of poetry that is being written.”