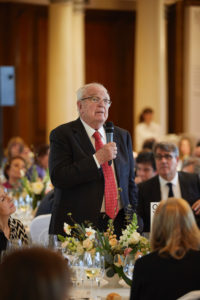 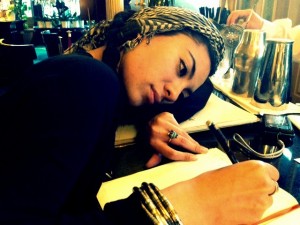 The LOEWE Foundation has returned last weekend to the Hay Festival in Segovia, “Imagine the World”, with reflections and poetry.

In the Gardens of the Convent of los Padres Carmelitas, within the context of the V Centenary of Teresa de Jesús, there was a special remembrance of the prodigious meeting between her and Juan de la Cruz in the sixteenth century, a historic moment for spirituality and mystic creation. Antonio Colinas, Clara Janés, José María Muñoz Quirós, Luis Alberto de Cuenca and Carlos Aganzo, approached them from their own poetic thought.

Antonio Lucas -winner of the LOEWE Poetry Award- and journalist Jesús Ruiz Mantilla analysed at the Church of San Nicolás, together with the film director and screenwriter Fernando León de Aranoa, his film A perfect day. The emotions and relationship between international voluntary workers living critical and frightening situations -both unreal and dramatic- led their conversation. “I like reality, but not realistic forms”, said the filmmaker. In the movie, a well contaminated by a corpse thrown inside with the evil will to intoxicate the water, brings irrational situations to the protagonists. León de Aranoa wished to reflect in his film a “living and brilliant energy… not melancholic”. Voluntary workers frequently turn to humour to overcome difficult situations. The conversation inevitably led to the situation that currently refugees live. León de Aranoa remembered that unfortunately this is a “recurrent problem in History”. It is necessary to “look for the source of the problem” and not to fall, as Antonio Lucas said, “into a false sense of goodness in the distribution of refugee quotas”.

In the last talk of the day supported by the LOEWE Foundation, also in the same Church, the journalist Manu Llorente spoke with Luis Antonio de Villena -man of letters and Jury of the LOEWE Poetry Award- about the situation of culture nowadays. Villena laments the current arid situation that has resulted “not from the lack of creation but from the absence of audience.” The poet believes that “only those with the best knowledge should go to university. It is not a place for everyone, only the best people from all economic levels should be able to attend university.” In his opinion, the lack of interest of young people in culture is a consequence of their precarious education and he insisted in culture as a fundamental condition in the formation of individuals. But he warns: “culture is a right for all and, if it is deficient, it will need the support of the government to survive.”