La fragilidad and Peachtree City, the winning books of the 33rd LOEWE FOUNDATION International Poetry Prize – published by Visor Editorial – were officially presented on 16th June. Following an extended period of time during which the pandemic prevented the celebration of these types of events, poetry took center stage at the Westin Palace Hotel in Madrid, bringing together friends, collaborators, personalities from the worlds of art and culture…as well as most Jury members and, needless to say, the Poetry Prize winners. 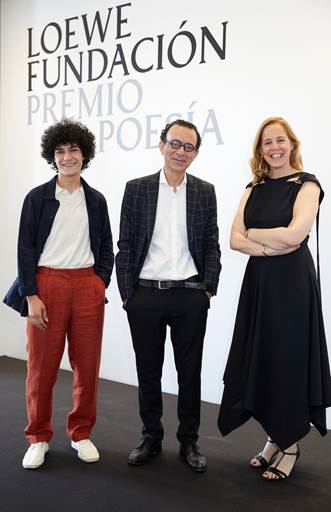 Last year was the first time two female poets won first prize, and also the first time since its inception 32 years ago that the award ceremony was cancelled. As such, this year’s celebration played host to last year’s winners, Aurora Luque (winner of the LOEWE Prize) and Raquel Vázquez (winner of the Young Poet’s Award), who were honored together with this year’s awardees. During the presentation, Sheila Loewe, President of the Foundation, reminded the audience how “we had to cancel last year’s award ceremony at the very last minute. This time, nothing will prevent us from celebrating poetry together”.  Raquel Vázquez read “Un lugar” from her book Aunque los Mapas, and Aurora Luque read “Gavieras”, also the title of the winning book.

Enrique Loewe, Honorary President of the Foundation, celebrated the continuity of the LOEWE Prize adding how poetry “has perfected me as a human being and as a connoisseur of a world as deep and full of nuances and surprises as is the world of poetry”. In remembrance of Francisco Brines and Caballero Bonald he added, “Today I am moved by this solitude, by what I learned from them, and by how they helped us keep going for so long”, he concluded. 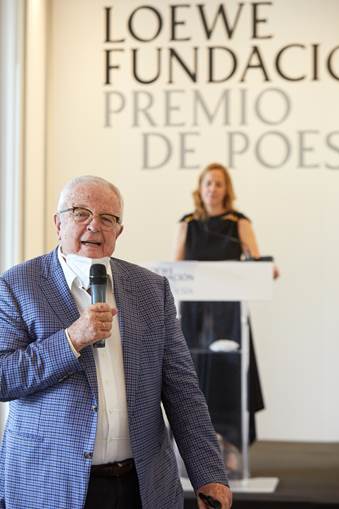 Elena Medel, winner of the 2013 Young Poets Award, presented Peachtree City. “I recommend you read Mario’s book without thinking about his age. Of course it’s remarkable that he is only 17 and that he wrote it when he was 16, but it seems rather unfair to reduce such intelligent, generous, and brilliant writing to a number. It is an exceptional book,” she said during the presentation. A book that, in her words, “is about poetry’s identity and personal value, and its ability to forge who we are. Mario’s poetry is a lifeline allowing us to face the world”. Mario Obrero celebrated the fact that attendees “made time for poetry” in their schedules and also thanked the LOEWE Foundation and Elena Medel. According to the poet, Peachtree City is the expression of “poetry as a place we all have in common where empathy exists, allowing us to poetically identify with others on the basis of hope, solidarity and a deep awareness linked to beauty and memory”. During his speech, Mario Obrero pointed out that “adhering to poetic logic could be one of poetry’s natural roles. Poetic logic is neither the logic of reality, nor the logic of what happens in our day to day, nor the logic that guides the dominant discourses that wear us down. That said, he does not believe that poetic logic is “less honest, less legitimate, or less licit; on the contrary, there are moments during which it is aware of what happens in the shadows, of things that, our everyday reality, in its clumsiness, is unable to perceive”.

Playwright Alberto Conejero presented Diego Doncel’s La fragilidad at this gathering held on “the occasion of poetry”. The “raison d’être” of the winning book, said Conejero, “is orphanhood and the days and nights leading up to it”. It is a work “with two protagonists: the father who dies, and the orphan, who is born. The scattered tesserae of two disintegrated men ¾one as a result of life, the other of death¾ who make up the refined mosaic of this work”. This collection of poems, Conejero added, “is a journey that takes place after the father’s death, yet moves in the direction of the father himself. It is at once voyage and shipwreck; tempest and safe haven”. Diego Doncel pointed to “that rare feeling one experiences when living life with intensity”, one that exists in concentrated fashion when creating poetry, but also when reading it, a homage to the books that have been published over the past 32 years thanks to the LOEWE Prize. “I hope that this book, which was born from feeling raw and exposed, and also from a place of truth, has touched a large number of people, and that they have felt accompanied by it,” he added. “I think poetry’s fundamental role”, he continued, “is to portray life’s intensity; that these few humble words ¾which have required centuries of civilization and, which, in my opinion, is one of the greatest achievements of the human mind¾ are capable of making us relive certain experiences. Poetry is not poetry if it doesn’t move you, even if only linguistically”. His book, he said, “is an attempt at showing that personal struggle is life’s greatest dignity. This is the diary of a struggle”. 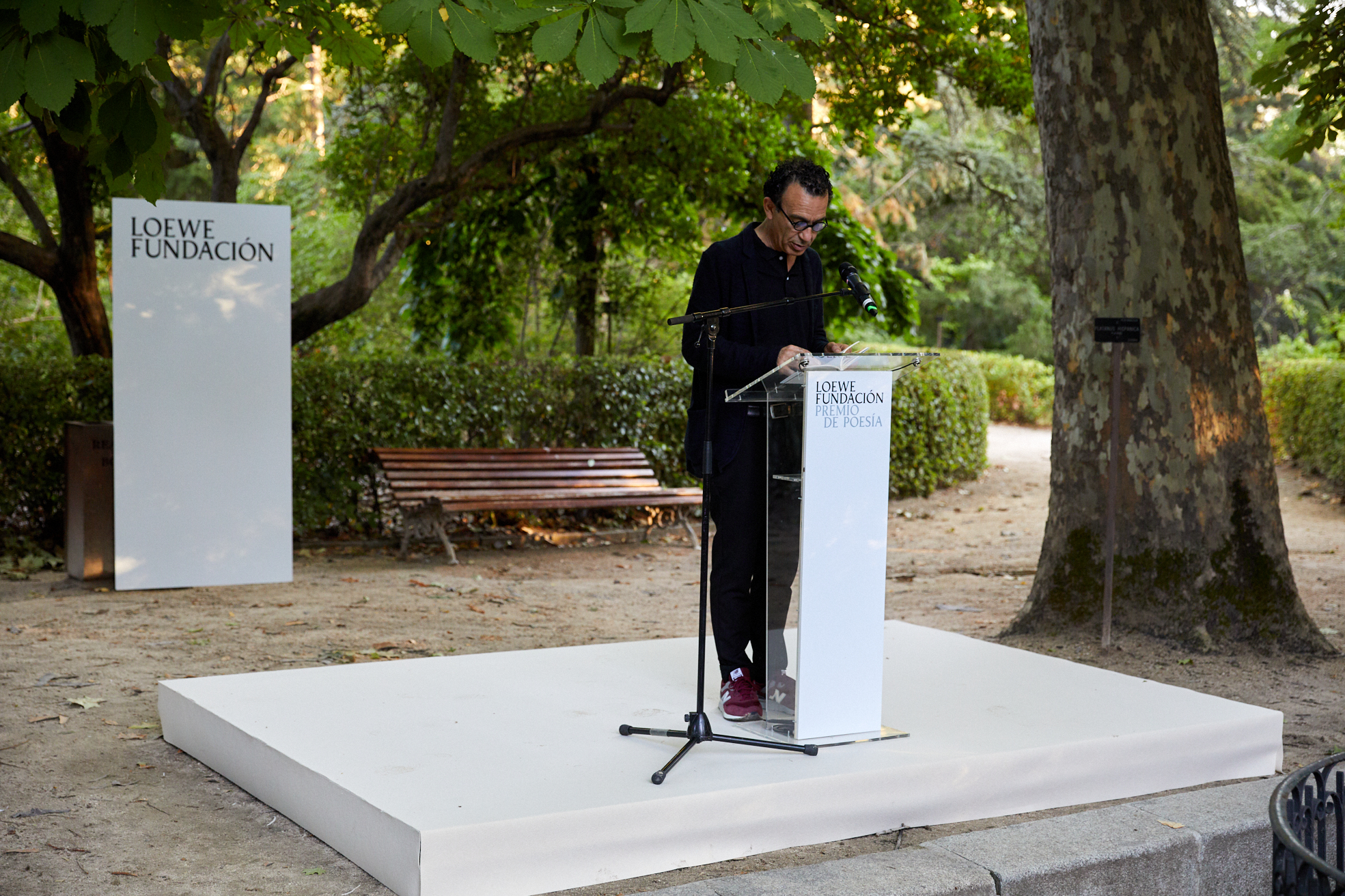 The following day, free of spring showers and in a seeming continuum of the previous day’s events, Diego Doncel and Mario Obrero were invited to read at the Royal Botanical Gardens in Madrid. Obrero spoke of how his stay at Peachtree City elicited a “longing for the Spanish “ñ” and the “accents on words” and Doncel reflected on “the fragility of what is important”. In this garden, the poets managed to temporarily pause the hustle and bustle of the city as they shed light on the fundamentals of the poetic process. 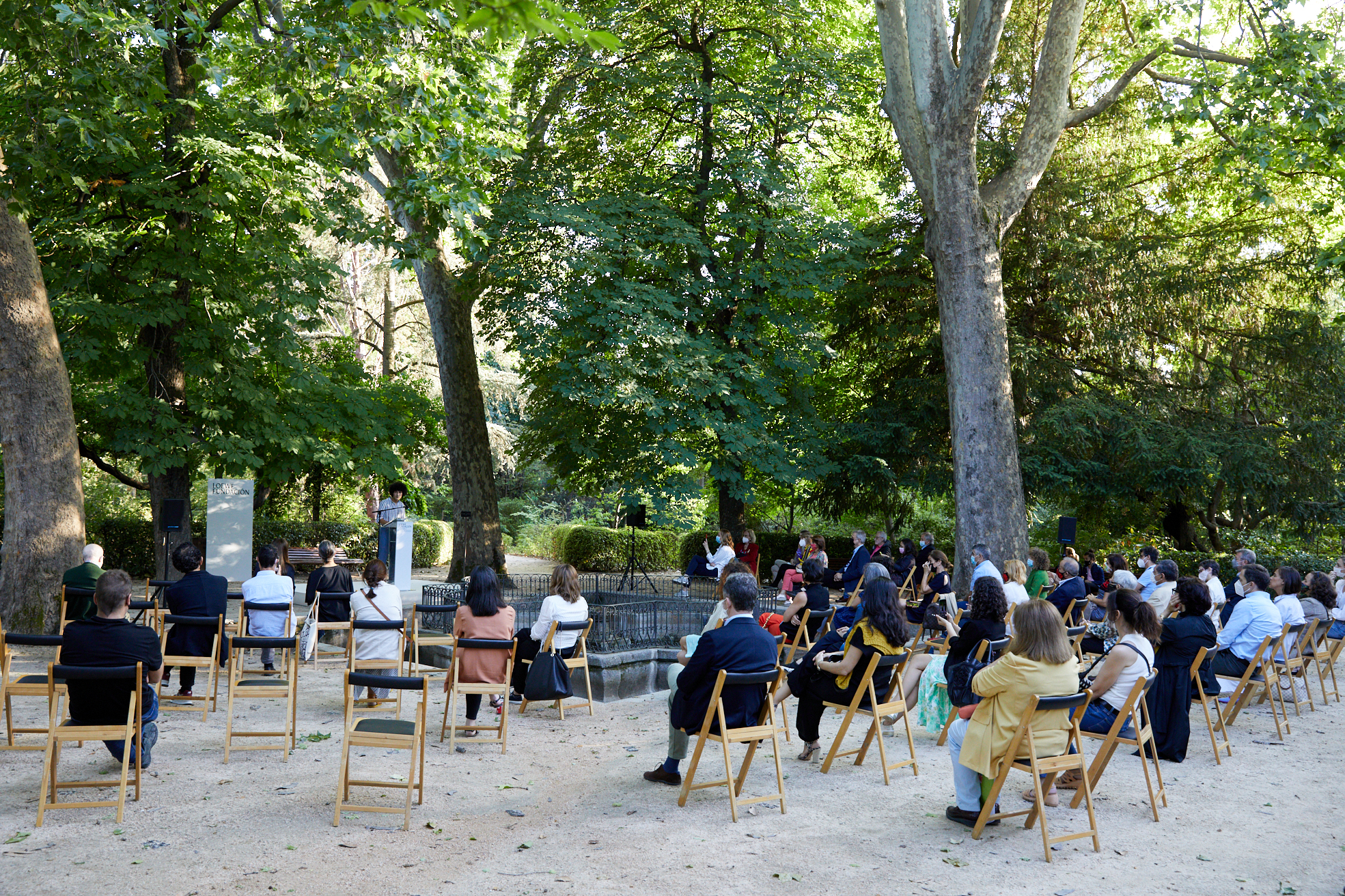